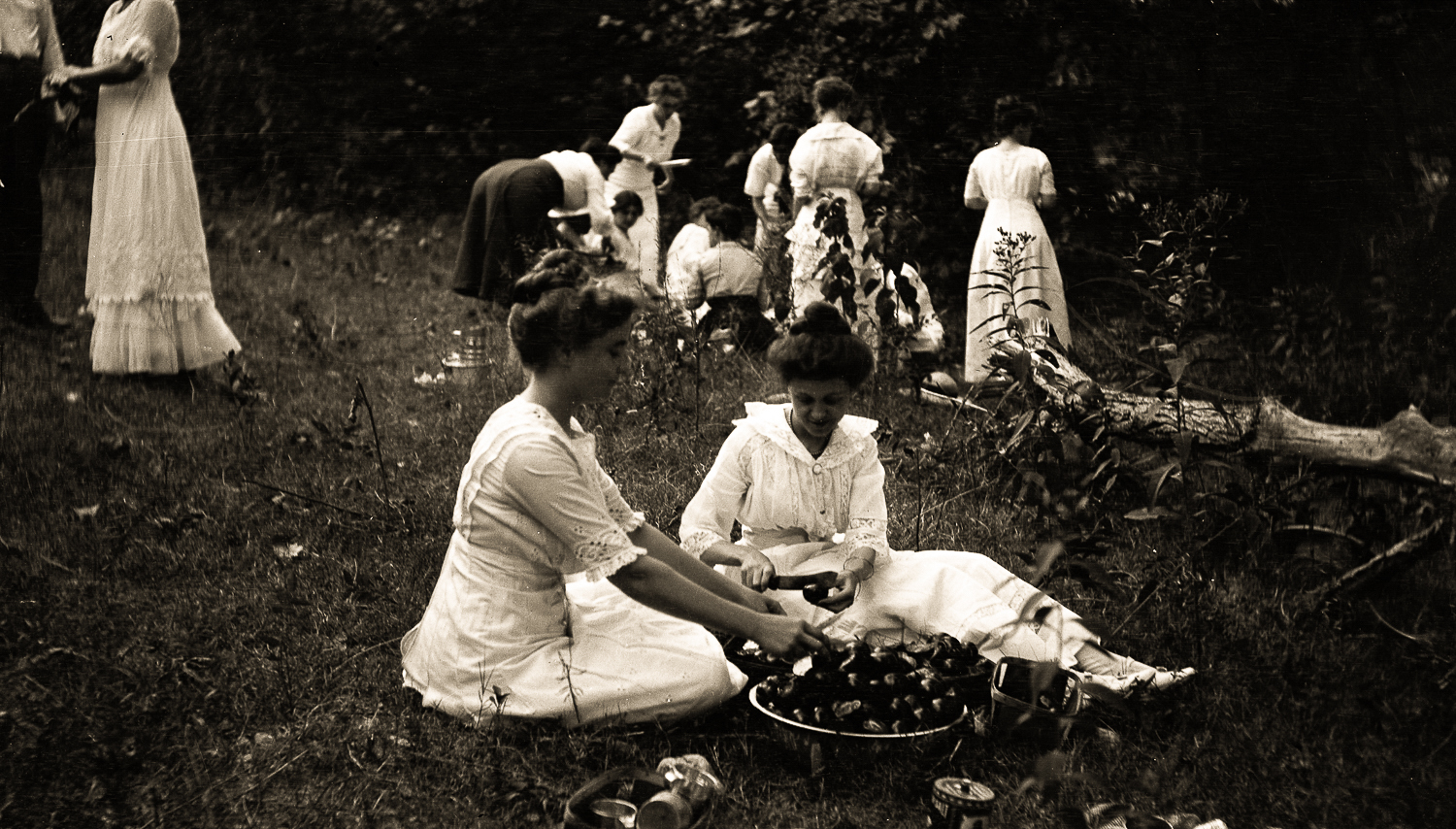 Voices Past and Present

There’s nothing like getting the information straight from the horse’s mouth, so to speak. We’ve asked Bryan residents and local historians to share specific memories and knowledge with us to give us insight into what life was like in Bryan during different time periods in history.

“If you got a Dr. Pepper way back then, man, you felt like you were
hmmm ummm nice!”

Marjorie Saculla shared her memories about the Salvato brothers, the Dr. Pepper Bottling Plant located in Downtown Bryan, and that one-of-a-kind Dr. Pepper feeling in this recording from Feb. 19, 2012. Born in 1924, from the sound of things, she wasn’t always lucky enough to have a Dr. Pepper at 10, 2 and 4 when she was growing up. Mrs. Saculla passed away on Feb. 17, 2015, almost three years to the day after she recorded this. She was 90 years old.

“She made us all get white t-shirts and she put on those numbers on the t-shirt. And that was your number. And that’s how we became a basketball team.”

Ibarra Elementary served Mexican students throughout the 1930s and 40s. The school was later renamed San Jacinto Elementary, and most of the students were eventually relocated to Bowie Elementary. Joe Ramirez shared two stories with us about the Ibarra Elementary basketball and baseball teams in these recordings from April 17, 2012. Mr. Ramirez passed away on Dec. 15, 2016. He was 78 years old.

🎧 Listen to Mr. Ramirez’s story about the Ibarra baseball team:

“We couldn’t come to the library because it was segregated. Margaret read all the books that the bookmobile had…so she said: I’m going to go to the Carnegie Library.”

In 2012, Carnegie History Center oral historian Anne Preston interviewed Sunny Nash (pictured here as a child). They discussed segregation when Ms. Nash was growing up, and if there were any places in Bryan that broke the barrier of segregation at that time. Ms. Nash described one specific day with her cousin Margaret and their encounters at the library and a local drugstore in about 1959-60.

“There was a big crack from one corner to the other…and they tied cables around the building to try to stabilize it.”

In this recording from Oct. 20, 2009, Norris Jay Pritchard Sr. shared a story about the construction of the Varisco Building in Downtown Bryan, and how it caused a pretty big problem for the building next door. Mr. Pritchard passed away in June 24, 2014. He was 75 years old.

“It was kind of humid and raining, and I looked out the window back to the west, over there toward Finfeather Drive, and I saw a tornado coming.”

(Photo source: Newspapers.com via The Eagle)

In this recording from Dec. 7, 2009, Roland M. Searcy describes the Finfeather Club in the 1950s, and what happened the day a tornado came roaring through Bryan in early April 1956.

“The fact that we were segregated. The fact that we had in common this one school…If you lived in Bryan from the 1940s forward, to the point in which the schools merged and were desegregated, you met at E. A. Kemp High at some point in your life. You had that experience.”

In 2012, Dr. Oswell Person, a leader in the field of higher education and E. A. Kemp Junior-Senior High School alumnus, spoke with Carnegie History Center oral historian Anne Preston about education in Bryan during segregation. Dr. Person is the author of two books on the African American experience in Bryan, Moving Forward from Behind: Life and Times of African-Americans in Bryan, Texas from 1885 to 1971, and African American Bryan, Texas: Celebrating the Past.

🎧 Listen to Dr. Person describe the strength of the bond that E. A. Kemp graduates share:

Read the transcript about E. A. Kemp graduates (opens in a new window)

🎧 Listen to Dr. Person speak about his upbringing and the impact that his teachers had on him:

Read the transcript of Dr. Person speaking about his upbringing and education (opens in a new window)

“While working and living in New York, my grandfather saw a newspaper advertisement: Come to the Promised Land! Bryan, Texas!”

In this recording from May 21, 2021, Linda Andersson Hoch tells about her family and how her grandfather, August B. Andersson, made the decision to move the family from Brooklyn, N.Y. to Bryan in 1927.

August B. Andersson’s trip to purchase a farm in Bryan even made for a small clip in the Bryan Daily Eagle. Interestingly, it says that he saw an advertisement in “The Eagle.” But this is most likely the Brooklyn Daily Eagle which was published in New York from 1841-1963.

“I am so thankful my grandfather decided to come to the advertised promised land: Bryan, Texas,” Mrs. Hoch said.

“When they docked in Galveston, Rosario told Rosa that he would be back for her.”

In this recording from May 2021, Anne Boykin shares with us the story of her family’s immigration from Sicily and the remarkable tale of how her great-grandparents Rosario and Rosa DePasquale met and fell in love aboard a ship on the journey from Sicily to Texas in the late 1800s.

“He had to make rounds in a buggy…and it was pretty bloomin’ cold.”

Dr. Oliver graduated from Baylor University and the Tulane Medical College in New Orleans, and had gone abroad to further his studies. After stints in New York, Italy, France and Germany, he came home to the Brazos Valley and developed a reputation as one of the best doctors in central Texas.

🎧 Listen to Ms. Thomas tell about her grandfather and his views on education:

Read the transcript of Ms. Thomas talking about her grandfather (opens in new window)

🎧 Listen to Ms. Thomas and Mr. Oliver tell about their grandfather’s bear-skin gloves:

Read the transcript of Ms. Thomas and Mr. Oliver talking about their grandfather’s gloves (opens in new window)

“And Red Rover, come over.”

WTAW’s roots began in the amateur radio club at Texas A&M in the 1910s, and it was licensed as a public radio station in 1922. Bill Watkins purchased the station in 1960. Mr. Watkins sat down with us in May 2021 to discuss his memories of WTAW including the death of President John F. Kennedy, being a daytime-only AM radio station, getting advertisers in the age of television and the WTAW news van, “Red Rover.”

🎧 Listen to Mr. Watkins tell why WTAW was originally a daytime-only station:

Read the transcript of Mr. Watkins speaking about WTAW (opens in a new window)

🎧 Listen to Mr. Watkins tell about how he was able to get advertisers despite the new age of TV:

Read the transcript of Mr. Watkins speaking about getting advertisers (opens in a new window)

Read the transcript of Mr. Watkins speaking about President Kennedy’s assassination (opens in a new window)

Read the transcript of Mr. Watkins telling the story of “Red Rover” (opens in a new window)

“A&M said the airmen and the Aggies were fighting, so Daddy said ‘I’ll fix that,’ so he built the Sugar-n’ Spice out by the airbase…so that they can use that one and A&M, Aggies, can use the Triangle Drive In and keep them separated.”

In September 2021, Carnegie History Center oral historian Anne Preston interviewed longtime local businessman and restauranteur Joe Ferreri, and his daughters Susan and Gayle, about his life and restaurant ventures. Mr. Ferreri was 102 years old at the time of this interview.

🎧 Listen to Mr. Ferreri and his daughters tell about his drive-in restaurants in the 1940s and 1950s, the Triangle Drive In and Sugar-n’ Spice:

Read the transcript of Mr. Ferreri and his daughters talking about his drive-in restaurants (opens in new window)

“It was a one man school, he did everything. But that was a good experience for him because he really wanted to be an agricultural extension agent…and so it ended up an ideal place for him because all of these kids who grew up on these farms, they had to go to school.”

In this interview from May 2021, Wayne Sadberry, curator of the Brazos Valley African American Museum, talks about how his father, Oliver Wayne Sadberry Sr., was well educated during a time in the early 1900s when education for African Americans was difficult to come by. Sadberry Sr. attended Prairie View A&M and became an educator. One of his first jobs was teaching at a local Rosenwald School for rural African Americans. The Julius Rosenwald Fund constructed more than 5,000 rural schoolhouses for African Americans across the South by the 1930s. About 13 of these these schoolhouses were constructed in Brazos County and the greater Brazos Valley region.