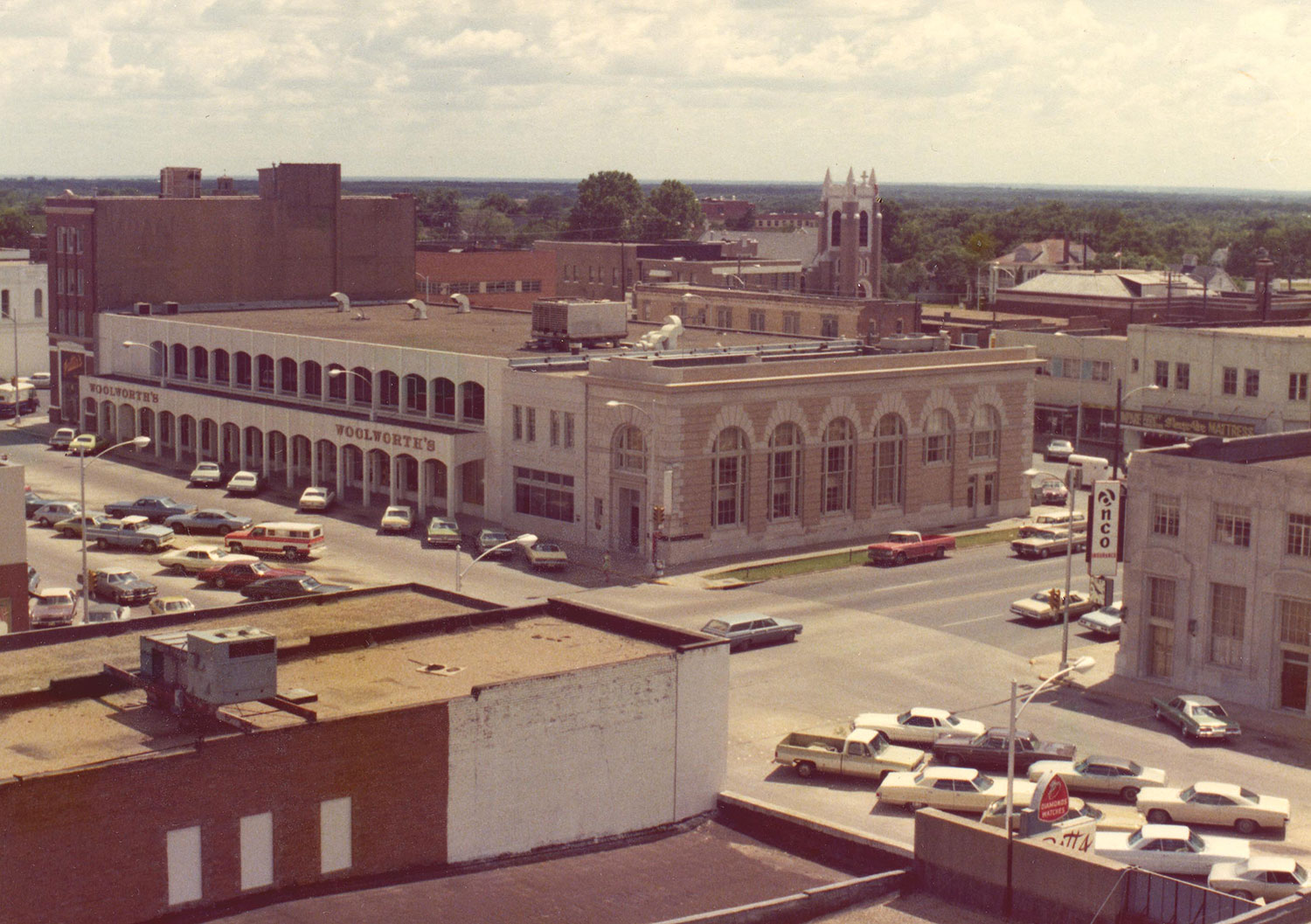 The Times,
They Are a-Changin’

Come gather ’round people,
Wherever you roam,
And admit that the waters
Around you have grown,
And accept it that soon
You’ll be drenched to the bone,
If your time to you is worth savin’,
And you better start swimmin’
Or you’ll sink like a stone,
For the times they are a-changin’.

While those lyrics to one of Bob Dylan’s most famous songs, released in 1964, carried different meanings at that time, as you read and listen to them now, they seem to sum up what was happening in Bryan during the 1960s, 70s and 80s pretty succinctly.

Times were changing. Institutionalized segregation was coming to an end. Bryan’s first African American and Hispanic city council members were elected. And the population of Bryan was growing considerably. At Texas A&M University growth was exploding. But with many of these changes, there was a negative knock-on effect. Yes, growth was happening, and that was a good thing. But it was also destroying the heart of the city, Downtown Bryan.

1961: Brazos Valley Museum of Natural History founded. Collections include the Albert Dalton Doerge Collection of 4,700 stone, shell and pottery artifacts from 9500 BC until recent times.

1962: The Bryan Air Force Base closes and the site is deeded to Texas A&M, which adds 1,991.39 acres in property. The land is operated as the Texas A&M Research and Extension Center for the next 25 years.

A long withering process: Downtown Bryan didn’t become a shell of its former self overnight. It was a gradual process that occurred over more than 30 years. Listen to Oscar Chavarria talk about the decline. Oscar was a Bryan police officer during this time, and his wife, Helen, was a city council member from 1983 to 1989.

Vick Pharmacy on the corner of 26th Street and Bryan Avenue in 1982.

Downtown takes a hit, but the city makes progress in other areas

Despite the decline of Downtown Bryan, lots of positive changes were happening in Bryan and the greater Brazos Valley community during the 1960s and early 1970s.

Anastacio “Andy” Herrera (1969-1975): Herrera was the first Hispanic to serve on the Bryan City Council.

1969: The new Bryan Public Library opens. The library would later be renamed in honor of longtime librarian Clara B. Mounce. The Carnegie Library is used by the city’s Planning Department.

1971: St. Joseph Hospital moves out of Downtown Bryan into a new facility at Villa Maria Road and 29th Street.

And in 1971, Bryan schools became fully integrated, with the new Bryan High School opening that September.

It should be pointed out that Bryan had implemented a school choice program in 1965 in which African American students could choose which school they wanted to attend, and had set up a phase-in plan to integrate grades one at at time over several years. These plans kept the schools from running afoul of the 1964 Civil Rights Act and ensured they would continue to receive federal funding. While some African American students did enroll at the formerly all-white campuses, no white students enrolled in the African American schools.

It also should be pointed out that the final integration was hastened along by a series of suspicious fires at four Bryan schools in 1970: Washington Elementary, Neal Junior High, Carver Elementary and Fannin Elementary. Washington, Neal and Carver were African American schools. Fannin was not. Both the Carver and Fannin fires were deemed to be arson.

Finally, on July 23, 1971, Judge James Noel found that Bryan still had five schools that were considered illegally segregated and ordered immediate desegregation. Bryan High School served only 11th and 12th grades that first year, then became a full grades 9-12 high school in 1972. The former E.A. Kemp High School was repurposed as a school for 6th grade students at that time.

1972: Manor East Mall becomes the first enclosed shopping center in the community. The mall was located at the site of the present-day Tejas Center.

Going around: Listen to local historian Henry Mayo and former Bryan Mayor Ernie Wentrcek talk about the Highway 6 Bypass, the reasons for it and how it affected the community.

Growth trends and a need for more power

One of the biggest changes to affect Bryan in the last 75 years occurred in the early 1970s as the Highway 6 Bypass opened to traffic. This four-lane highway that curved around Bryan’s downtown, commercial and residential districts wasn’t necessarily the death knell for a declining Downtown Bryan, but it certainly didn’t help as development now started to move out to the east and south of downtown. The Bypass did accomplish one thing almost immediately, however: Getting heavy trucks off Texas Avenue.

1977: Messina Hof Winery is established by Paul and Merrill Bonarrigo. Today, Messina Hof is recognized as a leader in the Texas wine industry.

Mid-to-late 1970s: The Queen Theatre closes and begins to fall into disrepair.

The declining trends in the 1970s, 80s and 90s for Downtown Bryan, compared with the growth and expansion outside the central business district, were not unique to Bryan. Many cities and towns (some would say most of them) experienced the exact same trends. Malls, shopping centers, multi-screen movie theaters – that was the next big thing. It’s just what happened. Businesses grew. The community grew. And the people who provided the power for all of this growth knew they needed to grow, too.

By the 1970s, Bryan Texas Utilities (BTU) had well over 12,000 municipal and residential customers, and it became clear that a more modern generating facility was needed. It just so happened that a byproduct of this new power plant would turn into the one of the Brazos Valley’s best outdoor recreational facilities.

In 1974, Lake Bryan was impounded to begin catching water to ultimately serve as the cooling reservoir for the new power plant. And in 1978, the Roland C. Dansby Power Plant, named for a former mayor of Bryan, came online with one steam unit, powered by natural gas with a fuel oil backup system. Two additional natural-gas-fueled generation units have been installed at the Dansby Power Plant in the years since, but these units do not utilize Lake Bryan for cooling water, since they operate much like jet engines.

Someone once said when speaking about the decline of New York City in the 1970s and the early 1980s, “No one thought it could get any worse for the city than the late 60s … and then the 70s and 80s happened.”

Obviously, it’s impossible to compare Downtown Bryan to New York City on most levels, except one. Downtown Bryan and Manhattan were both in decline at the same time, and they would both decline a bit further still. But people were taking notice, and movements had begun in both cities to restore them to glory. It would take decades, but the first seeds of revitalization were being planted in Bryan in the 1980s.

In many ways, it started in 1983, when the Eastside Historic District was created to preserve the historic character and value of many of Bryan’s old homes. There was also a push to get homes, churches and other buildings listed on the National Register of Historic Places.

1987: A new Bryan City Hall is constructed at the corner of Texas Avenue and 29th Street. This building continues to serve as the administrative offices of the city.

Opening salvo to save Bryan’s history: The Eugene Edge House on E. 30th Street, above, and the First National Bank and Carnegie Library buildings were three of the locations that were listed on the National Register of Historic Places as of 1987. In 1983, the Eastside Historic District was created to help preserve the historic character of many of Bryan’s old homes.

A downtown disaster, and the creation of an iconic music video

While the seeds were starting to be planted for the revitalization of Downtown Bryan and the city’s other historic icons, it takes more than planting to make seeds grow. It takes hard work, plenty of water and sunshine, and some fertilizer usually doesn’t hurt, either. Even then, sometimes it takes a while for new plants to take root and grow to a size where they can thrive and bear fruit.

And then there are the weeds, and the remnants of old plants, and the blight that can bring an entire garden to ruin. By the mid-to-late 1980s, that’s what was happening in Downtown Bryan. Little by little, blight was taking over and making the historic buildings hollowed-out shells of their former selves.

And then came the day The Palace fell.

In 1985, The Palace had become the last of the three theaters on Main Street to close its doors for viewing movies. And on May 24, 1986, the theater’s roof and two side walls collapsed shortly after a rehearsal by StageCenter, a local community theater group. No one was hurt in the collapse, but the damage was catastrophic both from a physical perspective and from a psychological one.

1988: Allen Academy moves to a new campus on Boonville Road and begins admitting girls into a pre-K through 12th grade college prep curriculum. The old Ursuline Avenue campus is sold to the Federal Bureau of Prisons.

This was perhaps the low point for Downtown Bryan. The Palace had been an iconic structure on Main Street, and its demise, in one instant, became symbolic of the overall decline of the downtown area.

The Schulman family donated the theater property to the City of Bryan in 1987, and the city in turn donated it to Downtown Now, a revitalization organization made up mostly of volunteers. And despite the massive amount of debris removed from the site by these volunteers, for several years the property remained in tatters, with rubble and water lying in the former icon’s footprint and shreds of the stage curtains blowing in the wind.

Perhaps this was the actual low point for Downtown Bryan.

In 1990, recording star and Texas A&M graduate Lyle Lovett filmed a music video in Downtown Bryan for his song “This Old Porch,” which was co-written with his A&M roommate and fellow recording star, Robert Earl Keen. The song references Bryan icons, and Lovett sang and played guitar on The Palace stage amid its ruins.

1989: The Texas A&M College of Architecture’s Department of Visualization academic program starts. The college has had a presence in Downtown Bryan through various exhibits since 2010 and hosts monthly exhibits that are open to the public during Bryan’s monthly First Friday events.

1989: The Parker Lumber Company building at 419 N. Main St. closes. The vernacular commercial structure had been used continuously by the lumber company since its construction in 1910.

This Old Porch: Lyle Lovett and Robert Earl Keen co-wrote the song “This Old Porch,” which contains references to their days as Texas A&M students and Downtown Bryan icons like the LaSalle Hotel and The Palace Theater.

The song’s music and lyrics, when set to the images of the downtown of that time, create a haunting and emotional story. One stanza specifically resonates with what downtown was going through.

Bob Dylan’s lyrics from 1964 described what Bryan would go through in the coming decades. Lyle Lovett’s and Robert Earl Keen’s lyrics, and the video from 1990, described a Downtown Bryan that had experienced those changes, and the results were not pleasant. But the song also offers a sense of hope.

The future of Downtown Bryan was going to be about “remembering the falling down” and then getting back up and standing tall again. It would still take time, but downtown was going to be reborn. And that rebirth would signal the beginning of a golden age for Bryan.

⇦   PREVIOUS: Depression, War and the Baby Boom
NEXT: Revival, RELLIS and the Road Ahead   ⇨